The left has lost their damn minds. They seem to have taken leave of their senses. This past week, we witnessed a multitude of perpetuated inaccuracies, meltdowns, public displays of derp and even incredibly offensive behavior. Why? It seemed that the perfect storm had landed: the combination of President-elect Trump taking office in mere days, his cabinet nominees having their Senate confirmation hearings, and congressional Republicans beginning the process of repealing and replacing Obamacare.

The week began with the actress Meryl Streep using her Golden Globe lifetime achievement award acceptance speech to rail against President-elect Trump. Liberals celebrated it while the majority of thinking conservatives shook their heads because they knew it was yet another instance where the left pushed ordinary Americans into the arms of Trump.

Then, after the Senate passed the first step in repealing and replacing Obamacare at 1:30am Thursday morning (this should have been voted on during the day, as the timing of the actual vote plays into the perception that this was done behind our backs) by authorizing a budget blueprint, Democrats fed their base an unhealthy dose of falsehoods. Senator Maria Cantwell (D-WA) said that we Republicans were somehow “stealing health care from Americans.”

The actress Jessica Chastain tweeted that the Senate had just stripped millions of Americans of the right for birth control to be covered under health care. (Spoiler: Obamacare and contraception coverage was not touched one bit.) Hundreds of prominent liberals misrepresented what had actually happened and did not seem to either understand how their statements were erroneous or, even worse, just did not care that what they were saying was false.

On top of this, several engaged in a blame game. One Los Angeles woman, Lisa Flip, took to Twitter to say that her boyfriend suggested they marry because of the prospect of the repeal and replacement of Obamacare. She was rather upset that this proposal lacked romance and blamed Republicans for this.

Friday saw prominent and high-ranking Democrats reach a new level of jaw dropping and harebrained behavior. Many, including civil rights hero Rep. John Lewis (D-GA) (note to President-elect Trump: attacking Lewis, especially on Martin Luther King Jr. weekend is a terrible idea and wrong), as well as former Hillary Clinton campaign aides Brian Fallon and Robby Mook, stated that Donald Trump was not a legitimate president. Why? Because of Russia and Vladimir Putin’s meddling in the presidential campaign. It reeks of being sore losers.

As I’ve previously written, Hillary Clinton is responsible for losing her election. She and her campaign, not Russia, were the ones who chose to ignore Wisconsin and Michigan. There is zero evidence that the actual election results were tampered with. Donald Trump’s victory came in a legitimate election. You do not have to be a Trump supporter in order to admit the reality that he won fair and square. Remember that it was Vice President Joe Biden who while presiding over the certification of the electoral college results in the Congress stifled the few House Democrats who attempted challenge the results. Biden sternly admonished them in three words, “It is over.”

Capping the week off was a tweet by the director Joss Wheedon. He openly stated that he would like to see Speaker of the House Paul Ryan be killed by a rhinoceros. 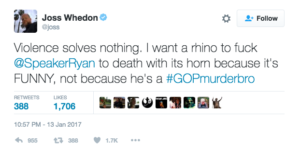 Wheedon admitted that watching such an awful event would be “funny” and entertaining. Not one part of that is remotely enjoyable or humorous. However, from just a cursory glance at the several hundred replies the tweet generated, many on the left found it to be somehow in good taste and endorsed the sentiment of the tweet.

Next week is shaping up to be an even more stressful week for the left with further Trump nominee confirmation hearings, more stories on Russia and the election bound to emerge, as well as Donald Trump’s inauguration. Their antics and histrionics are bound to be on full display as they are enter next week, so it is quite plausible that they will outdo themselves.

The left needs to focus on finding a way to effectively connect with the American people, but only after they regain a modicum of sanity.