In the waning hours of his administration, President Obama has used the power of his office to commute the sentence of Chelsea Manning. Manning, who leaked sensitive and classified documents to Wikileaks, was sentenced to 35 years in prison in August 2013, but now will be released on May 17, after serving under four years of the sentence.

Obama’s commutation of Manning is shameful and should not have happened. The crimes of Manning were actually ones that could have warranted charges of treason, which would is punishable by death. Now, Barack Obama has sent a message to those who endanger our national security: steal classified information and get off easy.

Many throughout the United States are angry and rightly so.

However, what is not being reported (and should make Americans even angrier) is how President Obama also commuted the sentence of Oscar Lopez Rivera, a member of the FALN and convicted terrorist. Lopez Rivera is responsible for multiple terrorist bombings in the United States, including the January 24, 1975 bombing of Fraunces Tavern in New York City.

The New York Daily News reported the day after the bombing:

“Four men were killed and 43 persons were injured yesterday when a dynamite powered fragmentation bomb, reportedly planted by an underground Puerto Rican group, exploded and spewed nails and other shrapnel through historic Fraunces Tavern and an exclusive dining club in the Wall Street district.

Deafened by the blast and covered with plaster dust and other debris from fallen walls and ceilings, most of the survivors staggered out to meet other casualties – passersby hurt by flying glass or by the concussion of the explosion.

Even as the dazed and screaming victims, one of them with an arm torn off, were being carried away, the FALN – Fuerzas Armadas de Liberacion Nacional Puertoriquena (Armed Forces of Puerto Rican National Liberation) – telephoned the Associated Press and gloated that one of its agents had planted the explosive device.”

The bomb itself was designed to kill as many people as possible.

In 1981 Lopez Rivera was sentenced to 55 years in prison for his terrorist activities and an additional 15 years in 1988 for attempting to escape from federal prison (he urged supporters to acquire weapons and explosives in order to help break him out of prison).

Throughout his incarceration, Oscar Lopez Rivera was unrepentant for his actions. He did not regret the loss of life or his terrorist bombings. To him, he was a “freedom fighter” and fighting for his political cause of Puerto Rican independence. It is the same train of thought used by other terrorists such as Hamas, Hezbollah, Al Qaeda and more. In 1999 President Bill Clinton offered Lopez Rivera clemency, but he rejected the offer . Why? Because of the stipulation that he renounce terrorism and his terrorist actions.

We must remember that FALN was responsible for planting over 130 bombs throughout the United States in the 1970s and 80s. Oscar Lopez Rivera has no problem with that and believes they were justified.

Yet, to activists including many Democrats (former President Jimmy Carter among them), Lopez Rivera deserved his freedom. They lobbied for it for another 18 years. At the same time that they were trying to set him free, Oscar Lopez Rivera expressed no regret for his actions.

Barack Obama exits the White House leaving a shameful national security legacy. He presided over the rise of ISIS, failed to act on Syria which resulted in the deaths of thousands, enabled the expansion of Putin and Russia’s influence, paid Iran a multi-billion dollar ransom for American hostages, abandoned Israel, and more. It is nothing short of calamity.

When they step out of prison on May 17, Chelsea Manning, who endangered American lives and national security, and Oscar Lopez Rivera, an unrepentant terrorist, will have Barack Obama to thank for their newfound freedom. Shameful. 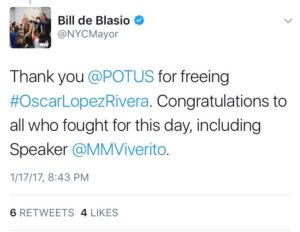