Republicans must lead the way out of the student debt crisis

Millennials are not connecting with the Republican Party and its ideals. Why should they? When issues impacting us millennials are raised by candidates such as Bernie Sanders, we Republicans reflexively mock the proposed solution without offering a fix of our own. On student debt, Democrats proposed making college tuition or debt free. It was a noble idea, but there was no proposed feasible way to pay for it. The GOP response? Laughing at those who pushed the issue and, in some cases, mocking the very people facing the problem as spoiled brats who want to be coddled at every turn. What a great way to reach out to millennials… Despite this, conservative ideas and policies can actually help alleviate the problems, including student debt, that millennials face.

Americans hold a collective $1.3 trillion worth (and growing) of student debt. At the end of 2015, millennial college graduates left college with an average of almost $35,000 in student debt. It is the highest this number has ever been and an economic crisis for not only us millennials, but for the United States itself. It impedes us from buying homes, goods, services, etc. and negatively impacts the economy as a whole. Even more worrisome is how there is a gender gap when it comes to student debt. 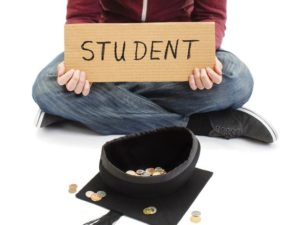 Women are more negatively impacted by student debt than men. While men and women are equal when it comes to the amount they pay for college, women will take longer to pay off the loans. Why? It is important to remember that women are paid less than men. For every dollar a man earns, the average woman makes $0.79. The lack of pay equity means that women will take over 20 percent longer to pay of the same loan as a man.

In order to combat this epidemic of student debt, we must use conservative principles and policies to help American women and families. First, it is imperative, as well as in keeping with the conservative ideal of equality, that we ensure women are paid the same as men. This will help ensure a level playing field for men and women when it comes to repayment of these loans or any loan for that matter.

However, pay equity alone will not fix the problem of student debt. In fact, we need to examine why the cost of college has risen and caused Americans to carry more debt. In nearly the last forty years, the average annual tuition at a public university has quadrupled to $9,139. At the same time, the number of administrators at colleges has increased as college facilities have been upgraded. Dorms have changed from the simple painted concrete walled rooms to buildings rivaling luxury apartment buildings. Some public universities are providing their students dorms with maid service, gaming centers, spas, saunas, lazy rivers, business centers, and many more amenities. Such conveniences are costly, passed on to the student and take away from the mission of college itself. It should be about finding organizations to get involved with that serve others and solve bigger problems in the world. College should not be about having every whim catered to and being pampered. 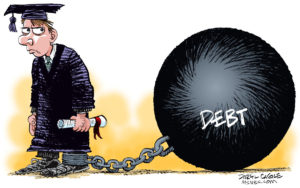 Then, there is the issue of student aid itself. The National Bureau of Economic Research has pinpointed student aid as a contributing factor to increased student debt. More and more students are applying for financial assistance and aid from their colleges. This causes colleges and universities to increase their tuitions to not only help pay for this increased demand in aid, but because their administrators recognize that they can profit from interest payments. The greater the debt, the more can be made on interest.

Tuition rises and more students apply for financial aid. In order to counter this vicious cycle, we need to reform the way in which student loans are issued.

Another contributing factor to the cost of higher education is how universities are employing professors who do not contribute toward the true goal of college: preparing the student to enter the workforce. Many colleges allow professors to teach classes about things that have zero applicable facets to a career. There is no better example of this than the University of Missouri, who employed the infamous communications professor Melissa Click (who famously called for physical force be used to remove a student reporter). Click taught students vitally important things like Fifty Shades of Grey and the relationship between food and class in reality television.

Even crazier, students and taxpayers would pay for Click’s research excursions to places like a Twilight fan convention—this alone should make you Team Fiscal Conservatism. She is not the only college professor who is using college funds to pay for what amounts to personal expenses. If these professors were elected officials, they would be barred from engaging in using public funds this way and even face federal charges for doing so.

How do we curb such waste and abuse of the system? The answer is simple: penalize the behavior by withholding funds from institutions that perpetuate such abuse. It sounds drastic, but it provides incentive for fiscally sane behavior by public universities.

Should we take these necessary steps, we can help to alleviate the problem of increasing student debt that our children will ultimately face. Americans will no longer have to be shackled by debt that will cripple them financially. We will have the freedom and flexibility to stimulate the economy by buying homes, cars, goods and other items. Even more importantly, we will be able to afford having children of our own.

It is clear that the student loan and debt system are in desperate need of reform. If conservatives were to champion fixing these problems, millennials will thank them for doing so.