The new normal: a White House in crisis

Donald Trump has been president for just ten weeks, but his White House is a White House in crisis. There is no clearer illustration of that than the past week and the many events the administration has experienced.

Starting with the failure of the AHCA, then the strange saga of House Intelligence Committee Chair’s Devin Nunes’ White House visit, and then culminating with Trump’s former national security advisor, retired General Mike Flynn, asking the FBI for immunity in exchange for his testimony in the Trump-Russia investigation, the past ten days have been rather rocky for the administration. However, they are par for the course with the Trump administration.

Since day one, President Trump’s White House has been in a fight with the press and other groups. Right out of the gate, it famously fought a quixotic battle over the size of the crowd that attended the inauguration being bigger than reported. They then had to deal with the firing of Michael Flynn, as well as Trump berating reporters at press conferences for asking about his plans to reduce anti-semitism in the country, the president’s tweet accusing former President Obama of wiretapping him during the election, as well as many, many more problems of their own making. It creates an environment of chaos that permeates the White House and, by extension, Washington.

President Trump has created multiple self-inflicted wounds that have hurt his presidency.

Most of the fights the president is having with the media or some other group are ones that could and should have been avoided. However, the president himself decided to pick them for reasons that are not initially clear. Each time that this happens, it is counter to the Trump’s own goals, as it changes the narrative from what the White House wants to focus on. Take for example Trump’s wiretapping accusation. He had just come out of an address to a joint session of Congress where he earned widespread praise for being presidential and having shed the problems of his first month in office. Yet, that entire narrative evaporated in an instant when Trump tweeted (without any evidence) the accusation that Obama illegally wiretapped him.

Now, as the Trump-Russia investigation heats up, the president is repeatedly pushing back against it. He says it is a bunch of nothingburger and that the investigation is only happening because of a political witch hunt that is designed to cover for the fact that Democrats lost the election. Yet, there is a massive amount of smoke and circumstantial evidence to warrant an investigation, which is why not only are the House and Senate intelligence committees probing Trump and Russia, but the FBI is too. Now, a former top aide to Trump, retired General Michael Flynn, is asking for immunity from the FBI. The president’s response, a tweet saying Flynn does not need immunity because this is a witch hunt, reflects a White House in crisis. 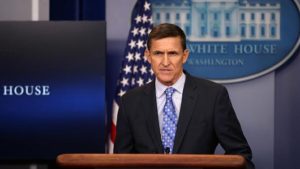 Flynn, Trump’s former national security advisor, is offering the FBI his testimony in exchange for immunity from prosecution.

As more and more comes to light, Trump does himself no favors by his quick and nonsensical dismissals of the investigation. Ultimately, his responses do more harm than good, as they come across as nonsensical rebuttals to serious questions and concerns.

The president almost certainly wants to end the questions about his and his campaign’s ties to Russia, as well as put the investigations to bed once and for all. Despite having the power to do this by appointing a blue ribbon commission to examine the Trump-Russia matter, he is seemingly unwilling to do so. As I argued in a New York Daily News column earlier this month, such a commission could only be to Trump’s benefit, especially if it found evidence to support his claims of zero wrongdoing.

Still, the president refuses and perpetuates the chaos environment that his White House is in.

Having a White House in a constant state of crisis is not sustainable. Not only does it make achieving progress and results that much harder, but it contributes to the anxiety and angst of the American people. Perhaps, President Trump likes that he has created a White House in crisis and sees some order in the chaos, but it has achieved nothing but problems for him and the country. However, the rest of  country is failing to see it and it certainly is a factor in the president’s historically low approval numbers.

President Trump has shown no signs of changing how he behaves. He seemingly will not cease creating the self-inflicted wounds and problems that have come to characterize his White House and administration. As a result, it is painfully clear that the new normal is a White House in crisis.