President Trump and Attorney General Sessions should appoint a special prosecutor to ensure impartiality and integrity of Russia investigation.

The revelation that Attorney General Sessions met with the Russian ambassador to the United States twice in 2016 and failed to disclose those meetings when asked, under oath, about Trump campaign officials having contact with Russia. This is not to say that he is guilty of perjury and worthy of criminal prosecution, that’s above my pay grade. However, Sessions disclosure failure has now irreparably damaged the integrity of any investigation, current or future, that the Justice Department will undertake on the alleged Trump-Russia connection.

No matter what result from the conclusion of the investigation, one side will not only be unhappy, but claim that the final decision on whether or not to prosecute was made due to political motivations. Should Sessions decline to move forward with prosecution, many Americans would believe that the attorney general was covering up wrongdoing, be it real or imagined. If Jeff Sessions were to choose to prosecute in this case, then many Americans, mostly Trump supporters, would cry foul and maintain that the attorney general was somehow caving to the “fake news” and political maneuverings of Democrats.

Now, Attorney General Sessions, as well as the investigation into the Trump-Russia ties itself, are put into a lose-lose situation. This predicament leaves only one course of action: the appointment of a special prosecutor to oversee the investigation into potential contact and/or collusion between the Russian government and Donald Trump’s presidential campaign. Doing so would help to preserve the integrity of the investigation and add morality to the overall process. 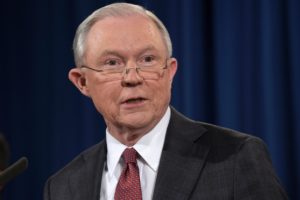 Attorney General Sessions announces his recusal from the Trump-Russia investigation at a press conference on March 2, 2017.

A special prosecutor would also make any and all conclusions reached in the case infinitely more palatable than Sessions could. Their integrity and independence would reassure Americans that this investigation was one free from influence on either side of the aisle and that it was above board. In other words, the type of investigation our justice system runs… one free from even the appearance of a conflict of interest.

Furthermore, President Trump and Attorney General Sessions would be politically astute and wise to call for the appointment of a special prosecutor. Doing so would greatly benefit the president and attorney general. As Republicans have just started to call for a special prosecutor, making this move now would allow the administration to get out in front of the situation and prevent the snowball effect. By this action, it would help the Trump administration to not only avoid the embarrassing perception that they were weak and pressured into this move by Congress, but that they were putting the integrity of the American system of justice above partisan politics.

President Trump has long maintained that he and his campaign had no contact with the Russian government. Despite the repeated denials of Trump and his aides, the question and circumstantial evidence remains and even grows. This has made it abundantly clear that the cloud of Russian collusion will hang over the heads of the Trump administration for the duration of the Trump presidency if they do not act.

The appointment of a special prosecutor would enable President Trump and his administration to put the issue of him and Russia to bed, especially if they took a “we have nothing to hide approach.” Should the special prosecutor find no evidence of collusion between the Trump campaign and Putin’s Russia, President Trump and his administration would shed any and all questions about his alleged improper contact with Russia and put an end to what is, at the very least, an enormous distraction.

Recusals themselves are quite common in the law enforcement and legal worlds. Judges, lawyers and investigators routinely recuse themselves when there is even the slightest credible hint that they would not be impartial. As an example, your author once witnessed a conservative federal judge (and by extension his law clerks) refuse to eat at or order from Grimaldi’s, a Brooklyn Pizzeria, due to the judge presiding over a case involving Grimaldi’s and trademark infringement. The reason for this was that such an act would call the judge’s impartiality into question. Such is the seriousness which the legal community takes integrity and impartiality.

In this investigation (or any investigation for that matter) into President Trump and his campaign’s potential contact with Russia, the three i’s must be maintained: integrity, independence and impartiality. Simply put, they are the bedrocks of our democracy’s legal system and ensure that our citizens maintain continued faith in both the process and the outcome.

Now that Attorney General Sessions is under a cloud that questions his impartiality, he must call for the appointment of a special prosecutor in order to preserve and protect the integrity of this important investigation. Doing so would demonstrate many things, but most importantly, it would be a clear statement that Sessions believes in the integrity, impartiality and independence of the investigative and judicial processes.