Calling a literacy test for prospective teachers “racist,” Social justice warriors (SJWs) have struck again! This time, they have successfully convinced the New York Board of Regents to end a literacy test for teachers, calling it racist. As a result of this misguided quest for justice, unqualified teachers will be allowed to teach our kids.

The content of the test itself was not objectionable to the SJWs, but the results were. It seems that of the people who took the literacy test, African Americans and Hispanics were more likely to fail than whites. 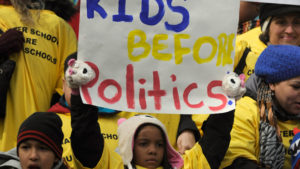 Social justice warriors have placed their “crusade for social justice” over the academic and future success of America’s children.

Of course, the SJWs got hot and bothered by this fact and screamed that the results were racist. They ignored the 2015 ruling of a federal judge who ruled that the literacy test was not racist or was biased toward or against any race in particular. Nevertheless, they persisted and yesterday claimed their scalp, as well as a victory for social justice.

Yet, the social justice warriors failed to take into account the dire consequences of their actions. Now, the removal of this test has made it vastly easier for unqualified teachers, no matter their ethnicity, to enter the classroom. With these new unfit teachers, students will be given subpar education and not be able to achieve as they should.

There is no question that a quality education vastly increases the future opportunities and economic success that a child will have in life. It enables them to climb the ladder of opportunity and realize their dreams. However, this decision by New York’s Board of Regents places another hurdle in the path of New York’s children and it is all thanks to the SJWs.

If social justice warriors really wanted to fight for real justice, they should take up the cause of education reform. By doing so, they will be fighting for kids in America who have seen Randi Weingarten and the American Federation of Teachers choose the comfort of teachers over providing opportunity and a better education for American children. They could advocate for access to charter schools, which offers their students a higher chance of success in life than our failing public schools do. Of course, social justice warriors won’t fight for this because it does not fit their narrative.

What does fit their narrative and provoke outrage from SJWs? The results of a fair and colorblind literacy test for prospective teachers being “racist.” Somehow, the very real outrage of allowing unqualified and ill-equipped teachers into the classroom to harm our kids is not. To SJWs, our children are collateral damage and they could seemingly care less.