President Trump has made a major political mistake by firing Preet Bharara as the United States Attorney for the Southern District of New York. This comes the day after he and 45 other US attorneys were asked to submit their resignations and exit their offices by the end of the day. Bharara refused to submit his resignation and Trump fired him. Ordinarily, this would be a move of the president’s that should be supported, but in this particular case, it will produce blowback.

First, one needs to understand who Preet Bharara is in the first place. He was arguably the most powerful US attorney in the country during his tenure, earning a reputation as a tough prosecutor and the nickname, “the enforcer.” In addition to prosecuting terrorists, Bharara was willing to take on corruption on both sides of the aisle. Bharara successfully prosecuted and convicted the Democratic speaker of the New York State Assembly, as well as the GOP majority leader of the New York State Senate.

Simply put: the name Preet Bharara struck fear into the hearts of politicians.

In November 2016, then President-elect Trump asked Bharara to continue as United States attorney, during his administration. The conservative organization Judicial Watch, as well as the left and the right, were thrilled that Trump had decided to keep the prosecutor who epitomized the “drain the swamp” attitude.

Just under four months later, President Trump seemed to have had a major change of heart and dismissed Bharara.

Now, Preet Bharara, a career Democrat, is free to pursue any personal political goals that he might have. Many have speculated that he will launch a bid for New York City mayor this year or New York governor in 2018, even if it meant a primary challenge to incumbent Democrats Bill de Blasio or Andrew Cuomo. Both are races that Bharara could win, especially since he was investigating de Blasio and Cuomo for corruption. 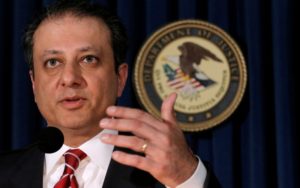 Firing Preet Bharara could have consequences in the future.

What should be truly worrisome for President Trump and his administration is that Bharara could become the uniting figure that opposes Trump. Democrats have tried to make Senator Elizabeth Warren that figure, but it fizzled quickly. The same with Senator Al Franken. Neither have what Preet Bharara does: widespread praise and respect from Republicans and Democrats alike, as well as a reputation for doing what is good for the nation, as opposed to playing party politics. Now, Bharara could become the respected opposition leader to President Trump and be the scourge of Republicans.

This should concern the Trump administration, as well as Republicans themselves. A few shrewd Democrats have privately speculated that due to Democrats having a short bench, Bharara play a major hand in the 2020 presidential election (he is ineligible to run himself since he was born in India), especially if he were elected to office in 2017 or 2018. Of course, this is speculation and parlor talk, but it is not the most far-fetched theory.

President Trump has now unleashed Preet Bharara. The question is now what will Bharara do? If “the enforcer” publicly takes on and opposes Trump, as well as Republicans, it could be bad news for the GOP and administration.