Clinton supporters still in denial about why Hillary lost

The new book Shattered documents how the Clinton campaign and Hillary lost the 2016 election. The just-released book contains multiple insider accounts that paint the campaign as anything but the model of efficiency that it promoted itself as in 2015 and 2016. In short, it’s a devastating portrait of a presidential campaign that is responsible for its own loss.

Of course, Clinton’s ardent supporters and former campaign aides have started to fight back on social media. The aides themselves view the indictment of them in Shattered as a threat, as who wants to have history remember them for being incompetent? So, these former aides began took to Twitter to post behind-the-scenes photos of the Clinton campaign.

On their own, the photos look nice and whatnot, but they do absolutely nothing to rebut the fact that Hillary lost due to incompetence. Yet, the Clinton loyalists persist that a photo of campaign staff with LeBron James is proof that Robby Mook, Clinton’s campaign manager, didn’t make strategic mistake after strategic mistake. Nor did that photo, or any other, show that the Clinton campaign had a clear and concise message that resonated with and energized voters.

It is time to separate the facts from fiction on why Hillary lost. First, the campaign was unable to answer the vital question of why Clinton was running in the first place. As a result, the perception that she was running because “it was her turn” took hold and hampered her ability to connect with voters out of the gate. 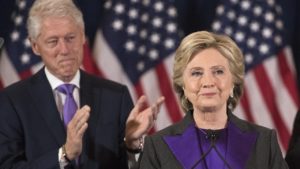 Clinton and her campaign refuse to accept responsibility for the fact that they made unforced error after unforced error. As a result, she lost the 2016 presidential election.

The absence of rationale for Clinton running for the presidency also played into the lack of message of the campaign itself. Both Donald Trump and Bernie Sanders were successful at establishing messages that made an impact with voters. If you were to ask ten random people what Trump’s election message was, all ten would answer, “Make American great again.” Were you to then ask those same people what Clinton’s was, you would receive ten different answers. That’s a major problem for any campaign.

It was also political malpractice for the Clinton campaign to ignore the alarms being sounded by experienced operatives on the ground in swing states. Wired campaign pros and allies in swing states, including Wisconsin and Michigan, were pleading with Clinton’s brain trust to stave off disaster. Of course, they ignored and dismissed the warning signs, which revealed their own hubris and arrogance. In Clinton’s Brooklyn campaign headquarters, her senior staff’s pomposity caused them to conclude that everything was fine and to not expend resources on key swing states.

The overconfidence at the top of the campaign also spread down to the lowest levels of the Clinton staff. A week prior to the election, I went to Brooklyn Heights for a dinner by the Clinton campaign headquarters. It was stunning to see a great deal of campaign staff out in nearby bars and audibly discussing what jobs they would receive in the Clinton administration. It was also 6:30pm; a time when they should still be in the office doing everything that they could to win votes.

Upon examination, it becomes abundantly clear that Clinton lost the swing states, particularly Wisconsin and Michigan, because they did not spend any time or resources there to ensure victory. Instead, Mook and other top Clinton aides decided to use those vital campaign resources to pad Clinton’s popular vote totals. Her campaign chose to launch ads and other programs in deep blue cities like Los Angeles, Chicago and New York. Not a single one would impact the electoral college result, but nonetheless, the Clinton campaign persisted. It wasted campaign reserves on the meaningless pursuit of increasing Clinton’s popular vote total so she could claim a broad mandate to buttress her presidential agenda.

Despite these and many more blunders by Clinton and her campaign, some refuse to believe that these contributed to the loss. They find other reasons and scapegoats, most imagined, to blame for Clinton’s failure to win. Even Clinton herself tried to shift responsibility from her and her campaign to voters themselves, when she accused many of voting against her due to misogyny.

No matter how Hillary Clinton and her team spin it, the truth is that Hillary lost because the evidence clearly documents that she ran a terrible campaign and was an awful candidate. To deny that is to deny reality.

Want to stay up-to-date on Evan's latest update? Enter your email below to stay in the know. We promise, we don't spam.