Nikki Haley’s leadership on full display at the United Nations

Over the past week,, U.S. ambassador to the United Nations Nikki Haley’s leadership, has been on full display. Her actions, even before Bashar al-Assad’s chemical weapons strike on Tuesday, have demonstrated that she is a figure who commands respect.

It started on Sunday with an appearance on ABC News’ This Week. Haley did what no other Trump administration official had been willing to do by flatly stating what we know to be true: Russia interfered in the 2016 election. “Certainly, I think Russia was involved in the election. There’s no question about that, and I think when they finish with all of this process, yes, they need to address Russia. They need to act.” Haley stated. The comment increased her credibility not only among Americans, but inside the world community.

However, Wednesday was her defining moment when she publicly confronted Russia’s ambassador to the UN with pictures of the children killed by Assad’s forces.

Haley’s speech to the United Nations Security Council helped to outline the moral case for President Trump’s strike against Assad last night. It also demonstrated the qualifications of Nikki Haley, which some questioned when she was nominated by President Trump to serve as ambassador. Now, Nikki Haley’s leadership and qualifications are no longer in question.

Today, in the wake of that strike, Bolivia (presumably at the behest of Russia) requested that the Security Council meet in closed session, which would have kept what was said from public eyes. Haley, who is currently serving as president of the United Nations Security Council, nixed the request with the following statement:

This morning, Bolivia requested an emergency UN Security Council meeting to discuss the events in Syria. It asked for the discussion to be held in closed session. The United States, as president of the Council this month, decided the session would be held in the open. Any country that chooses to defend the atrocities of the Syrian regime will have to do so in full public view, for all the world to hear. 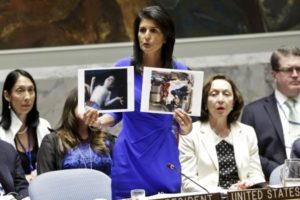 The ambassador’s insistence that those who sought to excuse or defend war crimes must do so for the rest of the world to see, was a signal that she and the United States are not willing to sweep atrocities under the rug. Additionally, it was yet another example of Nikki Haley’s leadership skills.

Ambassador Haley’s work at the United Nations is part of a larger body of work where she has achieved widespread praise for leadership skills. In 2015, as South Carolina governor, she helped remove the Confederate flag from the South Carolina statehouse. Before that, she was an already popular governor being mentioned as a potential vice presidential candidate in the 2016 election. Now, Haley’s work at the United Nations has put her at the top of the list of potential future secretaries of state. Some have even begun to whisper that she should run for president herself in the future.

The more Americans and the world see Nikki Haley’s leadership, the more they like what they see.