New York City Mayor Bill de Blasio is under fire from Republicans and Democrats alike for his decision to march in the Puerto Rican Day Parade with convicted terrorist Oscar Lopez Rivera. While many big names, including the New York Yankees, New York City Police Commissioner James O’Neil, Goya, and the NYPD Hispanic Society, have pulled out in protest, de Blasio remains steadfast.

Oscar Lopez Rivera was released from prison after serving 35 years of a 70 year sentence for his role in the bombings carried out by the terrorist organization FALN. Released earlier this month due to former President Obama commuting his sentence, Lopez Rivera remains unrepentant. His defenders, which include Democrats in New York City, say that he was not a terrorist, but a “political prisoner.” By their very definition, Al-Qaeda’s Khalid Sheikh Mohammed is one too. Obviously, these supporters of his are marching in the parade, but Bill de Blasio says he does not support the actions of FALN and Lopez Rivera. 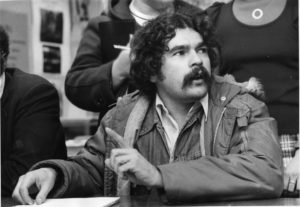 Bill de Blasio is winking at the supporters of Oscar Lopez Rivera, pictured here before his terrorism conviction.

The bumbling mayor of New York City, Bill de Blasio, claims that he does not agree with the terrorist acts committed by Oscar Lopez Rivera, but that he cannot control whom the organizers of the Puerto Rican Day Parade honor. The latter part is correct, but he certainly can signal that it is inappropriate to honor terrorists by declining to attend. Not withdrawing from marching in the parade is condoning the celebration of Oscar Lopez Rivera.

This will be the second time in the first two weeks of June 2017 that Bill de Blasio will be condoning hate and bigotry. On June 1, Linda Sarsour, the noted anti-semite and terrorist sympathizer, will be giving the commencement speech at CUNY’s Graduate School of Public Health & Health Policy. Again, de Blasio is giving the Oscar Lopez Rivera defense; saying that he disagrees with Sarsour’s views and statements, but that he does not control who CUNY invites. Nonetheless, he will attend and that attendance is condonation via wink.

Bill de Blasio’s position on this has changed in the past four years. In 2013, he signed a letter urging Brooklyn College’s political science department to remove its sponsorship of an event where three anti-Israel speakers were to appear. In that letter, de Blasio and other Democrats stated:

We are calling for Brooklyn College’s Political Science Department to withdraw their endorsement of this event, rather than send the message to its students and to the world that the divisive perspective offered by the organizing groups is Brooklyn College’s official view.

It is hypocrisy, pure and simple.

The actions of de Blasio are nothing new. In fact, they date back decades. He has called former President George H.W. Bush a terrorist and said the Sandinistas inspired him. Further, when he was a member of the New York City Council in 2004, de Blasio used his office to try to keep his daughter’s teacher from getting sent to prison for his part in an anti-Israel protest. This teacher had said that Israel itself caused terrorism and sympathized with suicide bombers.

So what will it take for Bill de Blasio to not condone and excuse the actions of people who put forth hate?  An uppercase R next to your name. In his quixotic quest to make himself into a national hero of progressives, which had repeatedly failed and in amusing fashion. de Blasio has demonstrated an eagerness to attack and all Republicans for any reason. He accuses them of hating minorities, women and being anti-gay. However, he ignores the vile anti-woman statements of Linda Sarsour and looks the other way when Oscar Lopez Rivera says he does not regret his terrorist activities.

If Bill de Blasio wants to show that he has values consistent with American values, he should not only pull out of the Puerto Rican Day Parade and condemn Linda Sarsour’s hate, but to