Odds are that Trump will face no consequences for Comey firing

President Trump’s firing of FBI Director James Comey was the latest and most serious controversy yet in his young presidency. Since Comey was heading up the FBI’s investigation into possible Russian ties to the Trump campaign, the move has triggered intense and vociferous debate about the constitutionality of Trump’s action. Yet, the conversation lacks the honest conclusion and acknowledgment that Trump will likely emerge from this scandal without leaving office.

First, it is important to recognize the facts of what happened. Trump exercised his constitutional authority, which Comey affirmed, in his firing of the now former FBI director. Appointees within the executive branch serve at the pleasure of the president and thus are subject to at-will employment. The president’s firing was constitutional.

However, there are circumstances where such constitutional actions are, in fact, illegal. In this particular case, the possibility exists that Trump did in fact break the law by firing James Comey. If he was terminated because the president wanted to stop the FBI investigation into Russia’s activities in the 2016 election (which is also focusing on individuals within the Trump campaign), then Trump could face a charge of obstruction of justice.

When Comey was initially fired, the White House stated that he was removed because of the recommendation of Rod Rosenstein, the deputy attorney general. Instantly, the story dominated the news and produced largely negative media coverage of the administration. President Trump was reportedly angry at the blowback, having believed that the reaction to the firing would be largely muted, if not positive. The president and his aides had grossly miscalculated. 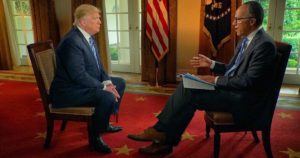 Within a few hours, senior White House aides Kellyanne Conway, Sarah Huckabee Sanders and Sean Spicer were doing the rounds on the cable news networks, attempting to push the administration narrative. During this, each pushed a variation of the theme: The Russia investigation has gone on long enough and it is time to stop. Considering how the public was already skeptical of the firing, this message immediately raised more flags about what Trump’s true motivation was.

Thursday, in a previously scheduled interview with NBC News’ Lester Holt, Trump stated that one of the reasons he fired Comey was because of the Russia investigation:

“In fact, when I decided to just do it, I said to myself, I said, ‘You know, this Russia thing with Trump and Russia is a made-up story. It’s an excuse by the Democrats for having lost an election that they should have won.”

The statement was indefensible and has raised questions over whether the firing of Comey was obstruction of justice.

So who will hold Trump accountable for this if he did indeed obstruct justice? Certainly not his vice president and cabinet, who under Section 4 of the 25th Amendment, are empowered to remove the president from office if they are “unable to discharge the powers and duties of his office.”

Today, Jonah Goldberg wrote in the National Review about how Trump was taking credit for coining the phrase, “prime the pump.” Goldberg wrote:

“The rush to defend the myth of Trump is causing conservatives to abandon their principles, standards, and credibility at a breathtaking pace.”

This encapsulates the larger problem of congressional Republicans who ignore or even defend Trump’s problems and missteps: they do so in a manner that will likely harm them in the long run. They have made the political calculation that they will work with Trump in order to get as many important agenda items as possible, it will require being close to the president. Were they to stand up to Trump on the Comey firing, or any other matter, it would hurt their chances at achieving results on tax reform, etc.

Several conservatives and Republicans, mostly ones who are not elected officials, are upset that congressional Republicans are not sticking to their morals and principles. They (I am one of these Republicans) want senators and representatives to stand up and say when Trump is wrong. Not only does it make us credible, but demonstrates our morals.

One potential way that congressional Republicans could publicly oppose the president is if James Comey were to testify in public about the firing. Should he be under oath and tell senators or representatives that President Trump attempted to intervene, interfere or impede the investigation into Russian involvement in the election, then Republicans would be duty bound to break from Trump. Without this exact event, they likely will not.

Another hurdle for taking action against Trump is that the public is not terribly interested in the Comey scandal. It is not receiving the same level of chatter on social media that other events of this presidency have generated. Further, Trump’s approval numbers in the Gallup daily tracking poll have remained virtually the same since the day of the firing. Both of these facts are to Trump’s advantage.

Many who want Trump to suffer the consequences for firing James Comey are potentially setting themselves up for disappointment. At present, there are too many hurdles and obstacles to overcome, which prevent action. While certainly events can alter this, such an event would have to be seismic. Until then, nothing is really going to happen.