According to a Washington Post report, last week President Trump disclosed highly classified information to the Russian foreign minister and ambassador to the United States. It is incredibly troubling, as the information provided by a nation who is an intelligence sharing partner was so sensitive, it was not shared with American allies.

The partner had not given the United States permission to share the material with Russia, and officials said Trump’s decision to do so endangers cooperation from an ally that has access to the inner workings of the Islamic State. After Trump’s meeting, senior White House officials took steps to contain the damage, placing calls to the CIA and the National Security Agency.

Within two hours of the story being posted, the White House sent General H.R. McMaster, the national security advisor, delivered a statement of denial. Unfortunately, his statement denied things that were not reported in the article and did not address the specific charge: that highly classified information was casually provided to the Russian government by President Trump. It did not, as McMaster alleged, involve sharing intelligence sourcing or methods and it also did not disclose the military actions.

McMaster’s statement makes it clear that he is attempting to save face with our allies. 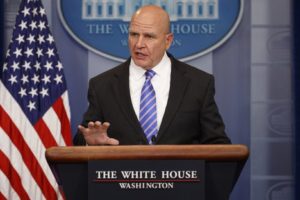 National Security Advisor H.R. McMaster denied things that were not in the Washington Post story.

The United States has intelligence sharing deals with many of our allies. The information shared helps us fight terrorists, as well as other threats. Now, Trump’s reckless actions have given our allies pause and could inhibit our ability to identify and handle threats.

Allies will be asking themselves if intelligence information they share with the United States government could be divulged by President Trump. The fact that allies are worried about whether or not they can even trust Trump should concern every American.

On top of this, the intelligence community is incredibly anxious, as they are asking themselves the very same questions as our allies. Their morale, already low from being attacked by Trump in the past, will drop even further, as they adsorb the severity of what Trump has done and prepare for being attacked by the president yet again.

The White House has got to do something soon to bring itself under control and in order. It’s got to happen. Obviously, they’re in a downward spiral right now, and they’ve got to figure out a way to come to grips [with] all that’s happening.

If Trump does not right the ship and soon, expect more Republicans to move away from the president and do so vocally.

At the same time, Democrats are plotting their reactions and chances are that they are going to seek gain political advantage. While tempting, it is a gigantic mistake, as the second they politicize this very serious situation, they force Republicans to move to their partisan corner. Democrats need to leave the politics out of this and focus on the facts.

The facts alleged by the Washington Post are very worrisome. The disclosure itself, as well as to Russia of all nations, does more than raise an eyebrow. Perhaps the most mind-boggling fact from this is the causal, almost boastful, manner in which Trump divulge this highly classified information.

As a result of Trump’s actions, our allies and intelligence community are very worried and for good reason. Charles C.W. Cooke summed up their thoughts and outlined the major problem of the Trump presidency with a simple tweet:

Disaster. Trump just has no grasp of the job and what it involves. https://t.co/jYwd7bfLdp