Senate’s BCRA does not help Americans or health care system

The Better Care Reconciliation Act (BCRA), the Senate’s health care bill, is a draconian proposal. Following in the footsteps of the House’s AHCA, the bill does nothing to lower the cost of health coverage, while also failing to improve the quality of care. On top of this, the BCRA is a bill that leaves the health care system worse off and ignores the Hippocratic Oath: First, do no harm.

One would think that after the AHCA debacle, Senate Republicans would have proposed a vastly different bill, but they did not. The BCRA disproportionately impacts Americans on the lower end of the economic spectrum. Take how the bill proposes aiding low income individuals and families by giving them federal tax credits to help them purchase insurance. In no way would that be of assistance to those Americans, as they do not earn enough to pay federal income tax in the first place. Without paying federal income tax, they cannot receive the tax credits. This portion of the bill sounds good, but does not actually have a meaningful impact.

A major concern of all Americans has been keeping the protections provided to people with pre-existing conditions. The BCRA does not remove this popular provision and keeps insurance companies from discriminating against Americans with pre-existing conditions. However, the bill does create a loophole for insurance companies where they can impose caps on coverage. This enables an insurance company to walk away from covering care in the middle of the course of treatment and leaving the patient with the tough decision of having to choose between halting care or paying for it out of pocket — an option that could have disastrous fiscal consequences for the person and/or their family.

If there is a segment of the population that is most-impacted, it would be senior citizens and not for the better. The BCRA allows insurance companies to charge seniors roughly five times more for the same coverage as younger Americans. While younger Americans are more likely to be healthy and would cost less for the insurance companies to cover, they too would be subject to these very cost increases when they themselves become older Americans. Seniors already face problems with being able to afford health care in the first place and the BCRA would exacerbate these difficulties.

Senior citizens would also be hurt by the BCRA due to its cuts to Medicaid (which covers 20 percent of all Americans). 1.4 million Americans live in nursing homes or assisted living facilities. According to the AARP, Medicaid plays a major role in helping these Americans:

With the cuts to Medicaid in the BCRA, roughly 910,000 Americans will likely see their coverage and, as a result, care diminished. On top of this, their families could be negatively impacted financially, as the BCRA paves the way for states to open the door for nursing homes to require that families of residents, no matter their own economic situation, pay for a portion of the care.

Republicans, rightly, have called for reforming entitlements because their costs have skyrocketed and made these programs unsustainable. However, blind and poorly designed cuts like those in the BCRA do not help the situation. Medicaid already has major issues that negatively impact its recipients. One such problem is Medicare reimbursement rates, which are resulting in fewer and fewer doctors to accept it. Presently, Medicaid reimburses doctors 61 percent of what Medicare does. The proposed cuts, or “slowing of growth of Medicaid” according to those who favor the BCRA, would likely worsen the situation and cause even more doctors to drop or refuse to accept patients on Medicaid. This would leave Medicaid recipients with fewer options for care.

After reviewing its many details, it is clear that the BCRA is not seeking to “repeal and replace Obamacare,” but is an assault on Medicaid itself.

The CBO has noted that some 23-24 million Americans would lose their insurance coverage if the AHCA were passed and implemented. It is likely that this number will be roughly the same when its score of the BCRA is released this coming week.

Presumably, the BCRA will also share deep unpopularity among Americans. 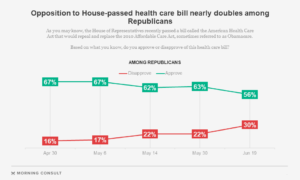 GOP disapproval of the AHCA has doubled in less than two months.

Last week, a Morning Consult/Politico poll found deep dissatisfaction and worry among Americans about the AHCA. A mere 26 percent of independents support the bill, while disapproval among Republicans has nearly doubled in the nearly two months since the end of April. Clearly, the bill is not one which Americans view positively. They see it as a proposal that would make their health care costs far worse, as 46 percent believe that the AHCA will increase their cost of care. Only 17 percent of Americans believe that the AHCA would decrease how much they pay for health care.

So what should Congress do?

As I wrote in the Daily Beast in March and have repeatedly said on air, Republicans should work with Democrats to repair Obamacare. The majority of the American public is supportive of such action. The previously referenced Morning Consult/Politico poll found that 65 percent of Americans favor Republicans working and compromising with Democrats to achieve bipartisan reforms to Obamacare. Only 18 percent oppose this and alternatively favor Republicans going it alone on health care.

These bipartisan compromises include President Trump’s proposal to increase competition by removing state lines, reforming entitlements and overhauling the Centers for Medicare & Medicaid Services (CMS) who use antiquated policies that cause patients to receive more expensive care. An example of one solution that CMS could and should move toward is telemedicine. The U.S. Census Bureau designates 80 percent of the country as “urban” and will not cover telemedicine services for these Americans. As I discuss in my book, GOP GPS, Medicare and Medicaid recipients are forced to receive more expensive coverage while doctors are likely to give less thorough care:

A recent Kaiser Health study found that over a third of doctors no longer are accepting new Medicaid patients. This, in turn, causes Medicaid users to resort to visiting the emergency room for minor ailments and injuries. The already astronomical wait time for all patients is further increased and hospital stays, doctors, and nurses are less able to provide personalized care to all patients.

In addition to the problems this backwards policy causes for doctors, nurses, and patients, it poses a massive fiscal problem for the taxpayer. The average cost of a visit to the emergency room in New York City is over $1,250. Yet only 4 percent of ER visits are for true critical care. The cost of using telemedicine for the same treatment is $50. This means that CMS is forcing New Yorkers and taxpayers to pay $1,200 more, a 2,400 percent markup, for care that can easily be handled by a telemedicine provider.

That’s not fiscally responsible. That’s taking a flamethrower to your tax dollars.

Pushing CMS to alter course and change this policy toward urban residents and telemedicine use is just one way that both Republicans and Democrats can come together to fix Obamacare and the American health care system overall. Doing so would demonstrate that they are still capable of achieving great things together.

Unfortunately, the BCRA incorporates none of these simple fixes and leaves our health care system worse off.

In May, Republican Senator Bill Cassidy of Louisiana stated that the Senate’s version of the AHCA needs to pass the “Jimmy Kimmel Test.” The test itself consists of whether or not one can make a strong moral argument against the bill.

The BCRA does not pass the Jimmy Kimmel Test. It does nothing to lower the cost of health coverage or improve the quality of care. Nor, does it utilize morals or compassion in its proposed solutions.

While passing this bad bill would produce political consequences for Republicans, the ramifications for Americans are far worse. The Senate should show morality and compassion by voting down the BCRA and then work to fix Obamacare in a bipartisan manner.