Democrats are pushing for single-payer health coverage for Americans. On the surface it sounds nice, as it would have the government giving every American health coverage. Its supporters promise that it is the cure-all to all of the problems that plague our health care system. However, this health-care program is not what it seems.

First off, the price tag of single-payer is enormous. Supporters claim that it will be offset by using the funds that would have gone to Medicare and Medicaid (which single payer would eliminate). Yet that would not be enough. As the nonpartisan Urban Institute has highlighted, single-payer would cause federal spending to increase $32 trillion over 10 years. Additionally, national health expenditures would increase by $6 trillion over the same 10 year period.

In order to pay for single-payer, the government would require increased revenue. This means that taxes would have to increase and Americans would have to pay more. Anticipating this, Democrats pushing single-payer proposed their own tax plan to try to offset the increased federal spending. According to the Tax Policy Center, the plan only increases revenue by $15.3 trillion. This leaves roughly $16.7 trillion that the government would need to raise in order to pay for single-payer. In order to do that, taxes would need to skyrocket.

Despite the math not adding up, single-payer proponents march on.

Last month, the California State Senate voted to implement single-payer. The annual cost is projected to be $400 billion. Unfortunately, California cannot afford it, as their total annual budget is $180 billion. Even if the state were to devote every single dollar of their budget to paying for this single-payer program, they would only be able to fund 45 percent of what is needed to pay for the program. 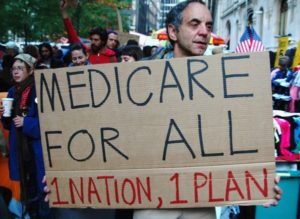 The California State Assembly shelved the single-payer bill at the end of last month. They did so because assembly members recognized that the only two ways to pay for such a program would be to either respond to a Nigerian prince email and hope they are not a scam or increase taxes exponentially.

Nonetheless, single-payer advocates persist. Their new mantra is that many Americans are willing to pay a little bit more in taxes in order to have secure and stable health coverage. Unfortunately for them, it will likely not gel with reality. When Americans find out what this health care program would entail and mean to them, particularly the increased taxes, its popularity will decrease. Cost of living and affordability are important to Americans. Single-payer’s drastic tax increases would make it harder for citizens to get by.

Interestingly, the Washington Post, not exactly the bastion of conservatism, came out against single-payer in mid-June. In addition to their belief that the cost was too steep, they admitted that in order for the program to work, doctors and health care providers would have to be willing to be paid less.

The editorial board went further and stated that Americans would have to be willing to “accept different standards of access and comfort.” It is a direct admission by the Washington Post that care would be negatively impacted. Access to doctors, as well as quality of overall care would have to be diminished in order for such a program to be a reality. Americans will not support such or any reductions to the quality of and access to health care.

The health care system in the United States is absolutely in need of modernization and improvement. As discussed in a prior post, the Obamacare replacement plan of Senate Republicans does not do the trick in helping Americans improve the health care system. Viable alternatives are needed to help, but single-payer is not one of them.