The way to stop North Korea and its aggression

North Korea just tested an intercontinental ballistic missile that is capable of reaching parts of Alaska. Kim Jong Un, North Korea’s leader, has resisted international pressure to abandon his nuclear and missile programs. His persistence has triggered the biggest nuclear crisis since the Cuban Missile Crisis. Defusing the situation requires that the United States take a new approach to North Korea and President Trump is signaling that he will.

First, it is important to note that, while on the table, the military option would likely trigger a war. This is dangerous when dealing with a regime like Kim Jong Un’s North Korea, as it is unpredictable enough that it might use its own nuclear arsenal. 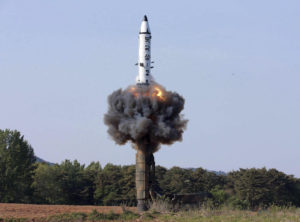 North Korea tests its “Pukguksong-2” missile in May 2017.

Further, North Korea has amassed such a massive amount of artillery on its border with South Korea, that in the first hour of any conflict, the regime could fire 500,000 shells on Seoul. 140,000 Americans live in South Korea, with over 28,000 being US military personnel, and they would all be placed at risk. No military strike could guarantee that all North Korean artillery would be eliminated and American lives protected.

The world community is proposing more of the same in its response to Kim Jong Un’s latest act of aggression. As North Korea challenges global security, countries like Russia and China are floating a deal where the regime would stop missile tests in exchange for the United States canceling the deployment of a missile defense system in South Korea (Russia and China view this missile defense system as a threat to their own interests). The United States is unlikely to accept the “deal,” especially when North Korea walks away from any and all deals it makes with the United States about its nuclear and missile programs.

Other nations are proposing sanctions be placed on the North Korean government. Since the early 1990s, sanctions have failed to work. United Nations sanctions are toothless due to the lack of enforcement mechanism that forces member nations to abide by them. Effectively, they are sanctions in name only. Another challenge to sanctions on North Korea is how other nations inadvertently undercut them through aid to the North Korean government. While trying to cripple the Kim regime through economic strangulation, South Korea sent almost $7 billion worth of aid to the North from 1991 through 2015. This aid weakened legitimate efforts to rein in and curtail the Kim regime’s nuclear program.

The last 25 plus years have failed.

President Trump has begun to implement a new method of handling Kim Jong Un that, hopefully, the President will continue. Gone are the calls for new rounds of sanctions against North Korea itself. Instead, Trump is wisely pushing for sanctioning other targets. In this method of countering the Kim regime, the United States places sanctions on companies, individuals, entities and countries that do business with North Korea and give it an economic lifeline.

Such a tactic has two major advantages. First, it devastates and incapacitates North Korea and its leaders economically. They would feel the impact and will be economically isolated from the rest of the world. The second benefit from this approach is that it will place pressure on countries like China — Chinese banks and companies are the main pipeline for the North Korean regime into the world — to exert influence on and coerce North Korea to cease its behavior.

Were this to be paired with a major push to have countries cease providing aid to North Korea, it could be incredibly successful. Ceasing aid would prevent the unintentional neutering of any and all efforts to apply economic pressure to Kim Jong Un and the North Korean elite.

If these economic sanctions against those aiding North Korea are successful, they will likely produce one of two results. The first being Kim Jong Un engages in serious and meaningful discussions about his nuclear and missile programs. These would hopefully result in a deal that North Korea would abide by. The hope is that the economic starvation that Kim and his leadership would face would be so severe that it would serve as an effective deterrent to ignoring or not abiding by the terms of any deal.

If President Trump were to fully implement this economic approach to solving the North Korea crisis, as well as get the international community on board, Kim Jong Un’s nuclear and missile programs could be effectively curtailed without firing a shot.