China’s aggressive expansion is bad for the US and world

Over the last several years, China has engaged in aggressive expansion through economic methods. As a result, the Chinese government is actively working to supplant the United States as the sole global superpower.

China’s formula is relatively simple. They invest heavily, through state banks and controlled corporations,  in infrastructure and other economic projects in Africa, Asia, the Caribbean and Central America. The investments do not benefit the local economies, as the Chinese import their own labor and equipment, as well as buy Chinese materials. Further, China then exploits the country they “invest” in by stripping it of its resources. At the same time, China uses these investments to push out other foreign investors in the targeted country, which makes the nation further dependent on China. The investment is made not for the betterment of any country other than China.

In April, I wrote about China’s expansion violating the Monroe Doctrine by investing in the Caribbean and Central America. As part of it, I highlighted the problems China had caused in the Bahamas. The column and a subsequent Fox News Radio interview caused a stir among Bahamians and even resulted in the now former Bahamian foreign minister holding a ridiculous press conference to denounce me. The issues I highlighted actually played a role in the Bahamian election this past May.

On May 10, Hubert Minnis and his FNM party were swept into power in the Bahamas. The FNM went from having 9 seats in a 38 seat parliament to 35 in a 39 seat parliament. It was an almost 390 percent increase in seats for the FNM. 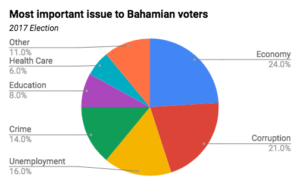 The exit polls revealed that the Bahamian electorate was very concerned about China. Almost 66 percent of Bahamians felt that the country was headed in the wrong direction. 55 percent said that the government’s handling of job creation was bad, while 56 percent said that the state of the economy was also bad. The two most important issues to Bahamian voters were the economy and corruption, both of which have been negatively impacted due to Chinese investment. One can draw a straight line from the concerns of Bahamian voters to the impact of Chinese investment.

Hubert Minnis, who became prime minister after the election, was given a clear mandate by the Bahamian people to move away from China and toward other foreign investors. There is a clear desire among the populace that the Bahamas cease permitting China to exploit the country. Should the Prime Minister move away from China, he would likely see his popularity increase. Yet if he continues the previous government’s practice of enabling China, then it would be viewed as a slap in the face of the Bahamian voters.

The Bahamian people are not the only ones watching as Prime Minister Minnis vacillates on the China question. Many foreign governments, including the United States and other western powers, are paying particular attention to the situation in the Bahamas. The actions of Minnis will reverberate globally and demonstrate whether or not a country that has been economically colonized by China can liberate itself. Should the Bahamas shed its client nation status, it would offer a roadmap for other nations in similar situations. Furthermore, the Bahamas would see an influx of foreign investors offering investments that permit the country to maintain its autonomy and ensure the investment actually benefits the nation itself.

The United States has already begun to signal that the Bahamas is a country they hold an interest in working with. During his U.S. Senate confirmation hearings, Doug Manchester, President Trump’s nominee to serve as U.S. ambassador to the Bahamas, stated that the Bahamas is a protectorate of the United States. Additionally, Florida Senator Marco Rubio expressed great concern over China’s presence in the Bahamas, as well as its $2.1 billion agri-fisheries deal with the Bahamian government. It would not be a surprise if, upon confirmation, Manchester were to make it clear to the Bahamian government that if they move away from China, the United States is ready to work with the Bahamas in a mutually beneficial way.

China’s global expansion, be it in Africa, the Bahamas or elsewhere, threatens the geopolitical influence and economic security of the United States and other western powers. As the Chinese government secures footholds in countries across the world, they are essentially blocking western nations from having any impactful and positive presence in these nations. This is also to the detriment of the United States, as China’s actions help to close off these markets to American businesses. As a result, it harms the United States economy, businesses and the American worker by reducing the number of consumers throughout the globe.

The world is watching as Prime Minister Minnis is confronted with the choice standing up to China and its colonization of his country or allowing Chinese companies to continue the economic exploitation of the Bahamas. It is now time he make a decision.