This fall, I will begin my own speaking tour that will take me to several colleges across the country. My tour should prove interesting, as being a Republican speaker on a college campus is cause for protest among some students. Will I be protested? It is highly unlikely. However, other Republicans and conservatives are targets.

Recently, conservative thinker Ben Shapiro spoke to UC Berkeley and was met with protests, as well as attempts to silence him. Why? Because to those who were upset, discussing GOP and conservative ideas is somehow a form of hate speech. Those who opposed Shapiro quite simply took leave of their senses. They falsely accused him of being a fascist and white supremacist. To them, his words were some form of violence being committed against them (they were not).

There is nothing wrong with disagreeing with speech, be it conservative views or somebody saying they prefer the Yankees over the Red Sox. However, the past few years have seen the rise of a movement that has sought to limit speech that is deemed offensive or hateful. It began on college campuses, where students and others in their college communities sought to undo “microaggressions,” indirect, subtle, or unintentional discrimination against members of a marginalized group. Now, these views are being injected into the rest of the country and it is occurring at a time when the country is incredibly divided.

The focus has shifted somewhat from “microaggressions” to hate speech. It goes without saying that hate speech is offensive and wrong. However, it is constitutionally protected speech and all Americans have the fundamental right to express it should they choose to do so. 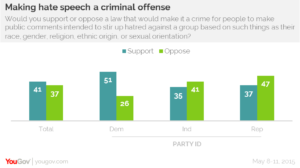 Such a belief is counter to American values and the principles in which the United States was founded. Yet, a sizable portion of the populace believes that the First Amendment should have an asterisk attached.

Congress shall make no law respecting an establishment of religion, or prohibiting the free exercise thereof; or abridging the freedom of speech, or of the press; or the right of the people peaceably to assemble, and to petition the Government for a redress of grievances.

Those 45 words make it abundantly clear that the government cannot enact a law restricting speech. Yes, something can be absolutely offensive and wrong, but it is the right of every American to express those views.

The landmark United States Supreme Court case Texas v Johnson found that the burning of an American flag by Gregory Lee Johnson was constitutionally protected speech. In his concurrence, Justice Anthony Kennedy summed it up perfectly:

Though symbols often are what we ourselves make of them, the flag is constant in expressing beliefs Americans share, beliefs in law and peace and that freedom which sustains the human spirit. The case here today forces recognition of the costs to which those beliefs commit us. It is poignant but fundamental that the flag protects those who hold it in contempt.

A September 2017 Brookings Institution survey examined the issue of free speech and how Americans view it. The survey found, unsurprisingly, that 62 percent of Democrats believe it is acceptable to shout down speakers at college campuses who say things that they find offensive. Doing so is not illegal, but it certainly is wrong.

Colleges themselves are supposed to be places where people can be exposed to and debate a diverse set of views and ideas. Of course, not all of the concepts and views that are expressed are meant to be sunshine and lollipops. They are meant to challenge and promote a greater understanding of alternative ideas. Nowhere is it written that one is required to adopt and adhere to set of beliefs upon hearing them. If a person is so offended by what a speaker on a college campus or anywhere has to say, then they should simply not attend the speech.

Americans should be increasingly concerned that, just like the push to criminalize hate speech, the belief in shouting down and limiting speakers with a particular point of view will migrate from college campuses to the mainstream. While it is happening some already, such behavior gaining acceptance represents a grave threat to the ideals of the First Amendment and the United States.

Those who believe in shouting down and limiting the speech of others, especially those who claim to oppose fascism, would do well to remember that doing just that is fascism.