According to Politico, President Trump will end DACA. The program that enables certain illegal immigrants who entered the country as minors, to receive a renewable two-year period of deferred action from deportation and eligibility for a work permit. Trump’s termination of the program is not immediate, as there will be a six month delay before it is eliminated. Nonetheless, the move will not be popular among most Americans. 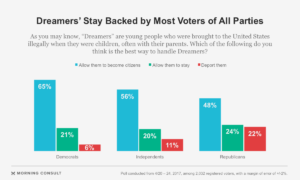 DACA is widely popular among all Americans

DACA is well liked by Americans. In a June 2017 Morning Consult poll, only 22 percent of Republicans favored eliminating DACA. 11 percent of independents and 6 percent of Democrats wanted the program ended. Among Hispanics, DACA was also incredibly popular. Ending it will create more political challenges for Republicans, especially with Hispanics.

This should worry Republicans, as we already are experiencing a crisis with millennials. Only 1 in 5 identify with the GOP, an all-time low. Further, they are the largest generation and biggest portion of the American workforce. This is in addition to the fact that millennials are the most-diverse generation in American history, with 44 percent being minorities.

So, what sort of message does Trump ending DACA send? Not a good one.

In six months, it will be even worse, as the six month delay allows Congress to pass legislation that keeps DACA. Unfortunately, given the track record of Congress of late, it will likely fail. The failure to pass will give Trump the ability to blame the GOP House and Senate for DACA’s end. Remember, Trump has spent the past few weeks distancing himself from congressional Republicans, so it is likely to make the party as a whole look even worse.

At a time where the GOP is not winning over Hispanic voters, DACA’s end is another major roadblock and will only set the party back.