In the lead up to Election Day, Republicans publicly and privately wished that the booming economy would blunt the impact of enthusiasm among Democrats. This would simultaneously negate the shift in the demographics of the electorate. Now, eight days after voters went to the polls, it is clear that Democrats rode a blue wave to major victories at every level. Their gain of over 30 seats (and counting) in the House of Representatives, is all the more remarkable when one takes into account the strength of the economy itself. Both the economy and demographic shift were key to the results in 2018, as well as will play important roles in the 2020 election.

How the economy factored into the 2018 midterms:

Unemployment is at lows not seen since the 1960s, wage growth not seen in a decade and consumer confidence at its highest levels in 18 years. Regardless, the economy failed to buoy GOP candidates and preserve their majority.

Conventional wisdom has long held that when the economy is in good shape, the party of the president in power reaps the electoral rewards. So why didn’t Republicans benefit from the economy? The answer is not as simple as it seems. 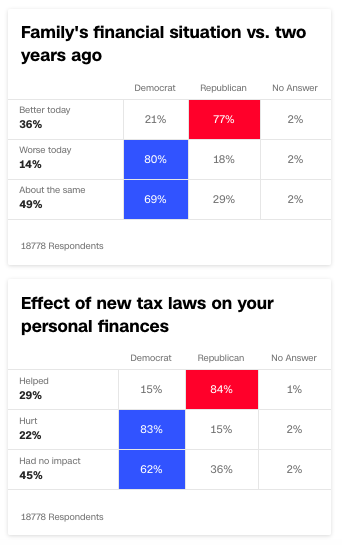 According to exit polls, 68 percent of voters said that the national economy was strong. However, 49 percent said that their financial situation has remained the same since Donald Trump took office and these voters chose to back Democrats 69-29, slightly more than a 2:1 margin. And when it came to tax reform, the GOP’s biggest legislative accomplishment of the Trump presidency, a similar situation played out. 45 percent of voters said the amount they paid in taxes had not changed and they voted for Democratic candidates 62-36. (It is worth noting that the 36 percent of voters that said the economy was benefiting them overwhelmingly backed Republicans by 56 points).

It is evident that voters viewed the nation’s booming economy like it was an amazing party, but were upset that they did not receive an invitation.

On Monday, the National Review’s Jim Geraghty posited that the 2018 midterm election could very well be the electoral high-water mark for the GOP during the Trump presidency:

What should worry Republicans and Trump is that the economy on Election Day 2018 was just about as good as they could want, and the Democrats made those big gains anyway. The economic picture in autumn of 2020 may not be as rosy as it is now. We’re technically overdue for a recession, or at least a slowdown. The U.S. economy could slow down because of global-economic forces; a bubble bursting in the real estate, tech, or financial sectors; instability  overseas; tariffs… and we’re at trillion-dollar-a-year deficits already.

This warning of potential electoral calamity for Republicans if the economy were to slow down while President Trump is in office, is quite valid. Were there to be a downturn, the GOP would be at risk of losing a noticeable portion of voters who backed them in 2018. Additionally, Geraghty noted that the 2020 appears to be an uphill battle for Republicans given the erosion of suburban voters from the GOP.

The demographic shift in the electorate benefits Democrats:

When combining the suburban revolt with how the Republican base is becoming increasingly rural, white and older, Democrats hold the initial advantage heading into the 2020 election. Shifting demographics in the United States has caused electorate to become more diverse, as well as younger.

Republicans have long been aware of the changing face of America and its electorate, but so far have been unable to adapt. In the 2018 election, the GOP banked on the economy causing many voters, especially minorities, to not rock the boat. The hope was that while Americans were unhappy with President Trump and the Republican Party, they would view preserving the economy as more important and, as a result, stay home on Election Day.

Yet, the opposite scenario played out, as the 2018 midterm election saw the highest turnout for a midterm election in 104 years. African Americans broke for Democrats by 81 points and saw their turnout increase 157 percent — so much for the success of the #Blexit and #WalkAway campaigns.

Turnout among latinos, the second largest ethnic group in the United States, rose 174 percent and backed Democrats by 40 points. On top of this, the hispanic share of the electorate increased 33 percent from eight percent in 2014 to 11 percent in 2018. This should be of tremendous concern to Republicans. When it comes to hispanic millennials, who are almost half of all latino voters, 75 percent say that the GOP cares about people like them and a paltry 13 percent identify as Republican.

Republicans should be incredibly worried about how not only does a strong economy not personally touch voters, but that the composition of the electorate has changed and they have failed to adapt.