Twitter’s enforcement failure is fueling conservative distrust of the platform

Yesterday, Twitter permanently banned conservative personality Jesse Kelly from its platform. According to Kelly, no reason for his removal from the social network was given.

Many on the right were once again left scratching their heads as to what exactly Kelly tweeted that earned him the ban. Yes, at times his tweets were too snarky and sometimes outright obnoxious, but the lack of explanation by Twitter as to what exactly Kelly did wrong only creates more confusion and distrust of the platform among conservatives. And over the past year, there has been increasing chatter within the conservative community, including among elected officials, about implementing federal regulations.

Twitter is a private company and can ban anyone it wants, of course. But it would be helpful if the site administrators explained what exactly Kelly did to merit such draconian measures—especially if Twitter wishes to put a damper on the right-wing notion that social media censorship is a serious issue meriting federal intervention.

Already, the right has felt unfairly targeted and unwelcome on social media platforms and Silicon Valley itself. This feeling came to the fore during the 2016 presidential campaign, whens several Jewish Republicans who opposed Trump, including your author, were on the receiving end of a significant amount of anti-Semitic tweets and even death threats. We would report these blatant violations of the terms of service to Twitter, but no action would be taken — and in many instances, Twitter’s support team would say that a clear violation was anything but.

It was only when we spoke up and created bad PR for Twitter that action was taken. When I wrote about this problem for the Washington Post in June 2016, Twitter responded by taking action against the accounts I specifically cited in my column:

Take, for example, the Twitter account @yugetrunk, the sole purpose of which seems to be to harass and threaten minorities and Jews opposed to Trump — which meets the very definition of abusive behavior as defined by Twitter under its rules. Last month, I reported it for asking when I would be sent to the gas chambers (in a tweet that was later deleted). Twitter responded by saying they had locked and suspended the account. The moment I received the email, I employed Ronald Reagan’s trust but verify approach: @yugetrunk was still there, tweeting more and more vile hate, which continued, unabated, until Twitter was asked for comment prior to publication of this piece.

And this pattern of Twitter failing to properly and evenly enforce their terms of service has continued. Take Louis Farrakhan, the leader of the Nation of Islam, and his tweets as a prime example. He repeatedly has made anti-Semitic tweets, but Twitter has said he has not violated their terms of service. Last month, Farrakhan posted a tweet comparing Jews to termites, but Twitter told Buzzfeed’s Joe Bernstein that they did not view the tweet as a violation. 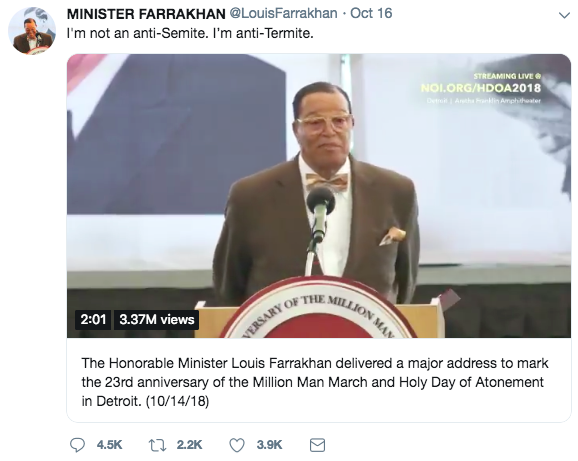 Then there is Bridget Phetasy, a self-described “verified nobody,” who repeatedly is harassed and dehumanized. She routinely receives messages along these lines, as well as actual death threats including, “I will wipe you the fuck out with the precision the likes of which has never been seen before on this Earth, mark my fucking words.”

And all of this helps to fuel conservative distrust of Twitter, which in turn has caused some to call for regulations of social media platforms. Now, we are seeing more on the right stating that Twitter is denying the First Amendment rights of users when they “censor” the speech of users on the right. While they’re absolutely wrong about this “infringement,” (the First Amendment applies to government censorship of speech, not a private company like Twitter’s) they are providing enough of a groundswell of support for Congress to propose the implementation of regulations that Twitter and other social media companies will despise. Yet, Twitter seems to have failed to recognize that their own actions are to their own long-term detriment.

Whether or not Twitter has an anti-conservative bias is up for debate. They certainly should provide more information as to what tweets caused Jesse Kelly to be banned from the platform. Their transparency on this matter, as well as several others, has been nothing but opaque. However, it is clear that Twitter has a problem with how it enforces its terms of service, which is clearly quite selective.