When I was in kindergarten, my class took a field trip to a classmate’s home to watch the inauguration of George H.W. Bush. My classmates and I, all of 5-years-old, could not comprehend why we were being told to focus on the boring proceedings on television, especially when a room filled with toys was a few feet away. Soon, we launched an insurrection and decamped to toy room. However, our teachers quickly quashed the class-wide rebellion and then proceeded to explain to us the importance of what we had no desire to watch.

“This is what good men and good leaders do.” My teacher said. The statement wasn’t meant in a partisan manner, but was more of a way of trying to make us understand that this peaceful transition of power between Ronald Reagan and George H.W. Bush was an example of graciousness, as well as demonstrated the very best in our Republic. While I did not truly appreciate this until I was much older and capable of comprehending its significance, nonetheless it has stayed with me for my entire life.

George H.W. Bush was the last gentleman in American politics. His one term in the White House, almost 30 years ago, might not have been so positively viewed during and in its immediate aftermath, but the passage of time has granted us the ability to better appreciate his presidency.

The Bush presidency confronted tectonic shifts throughout the world that few presidents have faced. The dissolution of the Soviet Union and Iraq’s invasion of Kuwait all presented unique challenges that could have resulted in chaos throughout the globe. However, Bush deftly handled each and avoided major conflict or, as in the case of Iraq, rallied the world to oust the invaders from Kuwait.

Bush and his wife, Barbara, hold hands at an event in October 2017.

And when the Berlin Wall fell, Bush did not go on television and address the nation to celebrate the downfall of communism. He had every right to take credit and score political points with the American people, but he chose not to. His rationale was that in doing so, he would have made it far more difficult for Mikhail Gorbachev to manage the fall of the Soviet Union. It wasn’t just a shrewd foreign policy decision, but a decent one. Bush knew America and and the U.S.S.R. were no longer enemies, but rather had the potential to become partners. It would have been irresponsible to inhibit a future of peace and prosperity in favor of spiking the ball in the end zone.

George Bush was a man of character and integrity who devoted his life to serving the nation. On his eighteenth birthday, six months after the Japanese sneak attack on Pearl Harbor, he enlisted in the Navy, becoming a naval aviator. He would later serve in Congress, as United States Ambassador to the United Nations, Chief of the U.S. Liaison Office to the People’s Republic of China (at the time, the United States did not have official diplomatic relations with China), Director of Central Intelligence, Vice President of the United States, and then President of the United States. And the common thread that defined him was his fundamental decency.

To Bush, people were not political opponents, but rather friends with which he disagreed. In fact, he viewed almost everyone he met as a friend. And that decency extended to the people around him. He rarely chastised staffers in angry tones and was always considerate of those who worked for him. As Richard Ben Cramer noted in his masterpiece What It Takes: The Way to the White House:

George Bush was serious about spreading cheer. He had to make sure to take care of everyone. That’s why he had eleven parties that Christmas. Most were minestrone guest lists: any Bush family in the region, of course; a few friends from the White House, maybe a handful from Cabinet departments, notably Commerce, where Bush got a lot of jobs for friends; some friends or friends from embassies, from the CIA, the Pentagon, politics … and, Hey! Bring the wife!

… Bush worked over the lists himself, always threw in a few surprises. A couple of parties were just for staff, of course, and two for the Secret Service, their wives and kids. In fact, the Secret Service was the reason Bush stayed in D.C. for Christmas. He wanted to let the agents stay home with their families.

That was George Bush in a nutshell: A man who cared about all around him. 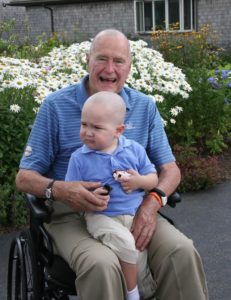 In 2013, the 2-year-old son of one of the agents in his post-presidency Secret Service detail was diagnosed with Leukemia. He had lost his own 3-year-old daughter, Robin, to the disease in 1953. What did the 89-year-old George Bush do? He and all of the other Secret Service agents shaved their heads in solidarity for Patrick, that little boy. That was the decency that defined George Bush.

Yet, he was not a man without his faults. Bush’s polite demeanor allowed the press and his opponents to unfairly label him a “wimp.” He needed to shed this image in the 1988 presidential campaign, so he turned to Lee Atwater, a master of the political dark arts. While this did help him win the presidency, one could credibly argue that this move helped to usher in our current era of politics where we seek to utterly destroy our opponents — the antithesis to how Bush believed political conduct should occur.

After losing his reelection campaign in 1992, Bush had every reason to be bitter. Yet, he was not. On the day he left the White House, Bush left a letter in the Oval Office for his successor, Bill Clinton:

When I walked into this office just now I felt the same sense of wonder and respect that I felt four years ago. I know you will feel that, too.

I wish you great happiness here. I never felt the loneliness some Presidents have described.

There will be very tough times, made even more difficult by criticism you may not think is fair. I’m not a very good one to give advice; but just don’t let the critics discourage you or push you off course.

You will be our President when you read this note. I wish you well. I wish your family well.

Your success now is our country’s success. I am rooting hard for you.

That was the grace of George Bush.

And he was utterly devoted to his family, especially his wife of 73 years, Barbara, who preceded him in death 227 days earlier. Their love for one another was clear and poignantly captured by former Obama White House photographer Pete Souza in October 2017.

Bush’s grandson, George P. Bush, tweeted last night that “He was more than a great man; he was a good man.” And we all shall miss that good man, as he set a shining example of what a leader should be. Courage, grace, devotion to service, kindness and decency made George H.W. Bush the last gentleman in Washington.