The only honest answer to Russia-induced anxiety: a blue-ribbon commission

The following appeared in the New York Daily News on March 16, 2017 and was coauthored by Evan and Naveed Jamali.

Since the fall of the Soviet Union, Russia has sought to regain its place in the world. While America turned its eyes toward other threats, Vladimir Putin and the Kremlin continued to view the United States as its main enemy.

This is why they have consistently countered U.S. interests abroad, and why they took the extraordinary step of interfering in the 2016 presidential election. As a result, not only did Russia undermine the United States in the eyes of its citizens, but for the rest of the world as well.

The world watches as the U.S. is now experiencing a period of angst that our leaders are failing to put at ease. Both President Trump, by dismissing Russian contacts with his now oft-used term “fake news,” and Democrats, who have allowed wild conspiracy theories on Trump and Russia to fester, have failed to quell the angst and agita.

This has thrown the world into a state of upheaval as it sees the traditionally stable United States wracked by apprehension and anxiety. Now, the President has accused former President Obama of conducting surveillance on Trump and his presidential campaign. The assertion, which was offered with zero proof, continues the constant undermining of the public trust and plays right into the hands of Putin.

As Republican Sen. Ben Sasse aptly put it, America and the world are currently experiencing “a civilization-warping crisis of public trust.”

Even with Vice President Mike Pence’s reassurances that the “United States will continue to hold Russia accountable,” many NATO and European countries remain on edge from Trump’s comments during the 2016 presidential campaign and after. This uneasiness has been seized upon by Russia, who now publicly boasts that a “post-West” world order exists. With these type of statements, it is clear that Putin seeks to discredit and minimize the influence of the U.S.

Delegitimizing adversaries through interference is not a new tactic for Russia. It has recently happened in Ukraine and the United Kingdom; it is currently happening in the French presidential election. 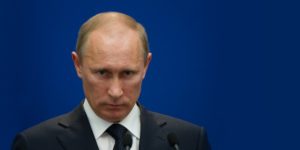 After the fall of the Soviet Union, Vladimir Putin and Russia have continued to view the United States as its prime adversary.

Putin does not achieve his goal through rigging electoral results, but by releasing damaging information about candidates that the Kremlin does not want to win. Russia acquires said information through illegal hacking and then disseminates it through the use of a puppet organization such as WikiLeaks. It is savvy, smart and helps to either produce a result that destabilizes a country’s political apparatus or severely weakens the incoming victor.

The only way to counter Russia’s meddling and to restore the public trust in our constitutional republic is to expose Putin’s actions to the world. In order to achieve this necessary result, America requires a full, open and completely transparent investigation into what exactly happened between the United States and Russia during the 2016 election.

Neither a special prosecutor nor the Congress are equipped to conduct an inquiry that puts the public and world at ease. The House and the Senate would be too open to charges that their conclusion was made on partisan grounds.

A special prosecutor, while avoiding the pitfalls faced by an investigation conducted by Congress, would not be able to provide the transparency required of this undertaking; especially if they were to not bring charges, as they would not be able to disclose their findings.

This leaves only one option: The formation of a blue-ribbon panel, similar to the 9/11 Commission, that is tasked with uncovering and laying bare the truth for all to see.

So that it succeeds, this commission requires not only subpoena power, but complete autonomy from the White House and the Congress so that the integrity of its work is preserved.

However, the panel’s integrity begins with its members. The perfect person to lead such a commission would be former Secretary of Defense Robert Gates, whose devotion to country is beyond reproach. Candidates for membership on the commission would likely include now retired public servants such as Admiral Michael Mullen, National Security Advisor Stephen Hadley, Admiral James Stavridis, Council on Foreign Relations President Richard Haass, Undersecretary of Defense Michele Flournoy and Secretary of State Condoleezza Rice.

Obama responded to Russia’s actions in 2016 by imposing sanctions and expelling 35 Russian diplomats believed to be spies. President Trump has taken no further action to retaliate and prevent future meddling.

As Sasse stated, “A quest for the full truth, rather than knee-jerk partisanship, must be our guide if we are going to rebuild civic trust and health.” A bipartisan commission is the only way to restore that trust, as well as end the era of doubt and angst that now plagues the United States and the world.

Jamali, a former FBI double agent, is the author of “How to Catch a Russian Spy: The True Story of an American Civilian Turned Double Agent.” Siegfried, a Republican strategist and commentator, is the author of “GOP GPS: How to Find the Millennials and Urban Voters the Republican Party Needs to Survive.”