The special elections to replace vacant House seats are being hotly contested by both Republicans and Democrats. Millions of dollars are being poured into these races by national organizations as they seek to bolster their preferred candidate. The GOP badly wants to protect its majority. Democrats, eager to gain back momentum, portray the elections as referenda on the young presidency of Donald Trump.

The truth is that these special elections mean far less than the over-interpreters would have it. They are really just a battle to set the narrative going into the 2018 midterm elections. They are not any sort of canary in the coal-mine warning of the results in the next midterm election.

Consider: In the 2010 election cycle, Democrats won all three of the competitive House special elections; which by their logic was a sign that they would perform well in the midterms. Yet in November 2010, they lost control of the House. Those 63 seats that Democrats lost in 2010 disproved the notion that special elections are a preview of a midterm.

But that recent history hasn’t stopped members of both parties from going to great lengths to act as though all the chips are on each and every district.

Last week, Republicans successfully retained the seat in Kansas’ 4th Congressional District, which saw the Democratic candidate have an abnormally strong showing and lose by only 7 points.

Democrats seized on this result and used it to push the talking point that even in deep red states like Kansas, Americans were rejecting Trump. 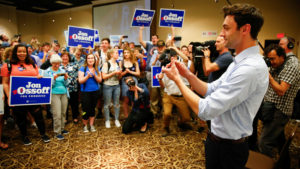 Democrats are helpign Jon Ossoff’s House candidacy in the hope that it will help set their narrative for the 2018 midterm election.

In truth, Kansas State Treasurer Ron Estes won the seat, but underperformed in the race due to his association with deeply unpopular Gov. Sam Brownback. At the same time, Estes’ Democratic challenger received 32% fewer votes than the Democrat who ran for the same seat in 2016.

This runs counter to the idea put forth by Democrats that their base is fired up and turning out. Nevertheless, they persist by pushing the closer results as proof positive of a coming Democratic wave in 2018.

Democrats are also using the GA-06 race to push their narrative that they’re surging and A Dem wave is coming. Democrat Jon Ossoff has risen to 43% at the polls while seeing his campaign coffers filled. In the first quarter of 2017, his campaign raised a stunning $8.3 million, with 95% of donations coming from out-of-state donors. This House district has not seen a Democrat receive more than 38% of the vote since 2002.

In the Montana special election, GOP candidate Greg Gianforte has already spent over $1 million while his Democratic opponent, Rob Quist, roughly $200,000. While polls have Gianforte ahead by over 10 points, Democrats will seize on the five-to-one spending ratio. They will suggest that it highlights how Republicans in safe GOP districts have to work five times harder to win what should be an easy race and that this is further proof of the GOP’s 2018 troubles.

No doubt it is in Democrats’ best interest to portray these special elections, as well as the enthusiasm within the Democratic activist community, as harbingers of Republican doom in the midterms. If Republican voters themselves were to accept this narrative, they would have less incentive to get involved in and turn out for important races.

Additionally, Democrats would benefit by the day-in, day-out repetition that they’re leading some sort of wave against Trump that might result in Republicans losing the House. It is red meat (or fair trade quinoa) for their base. As a result, that base would be motivated to get active in midterm races, be it through donations or other forms of involvement.

These races don’t matter on their own — but the narrative they help establish does.